Tonight marks the start of the FA Cup 4th Round - we predict the outcome of four matches.
The 4th round of the FA Cup kicks off on the 26th Jan, check our calendar below to make sure you don’t miss any important dates, as well as our predictions below. 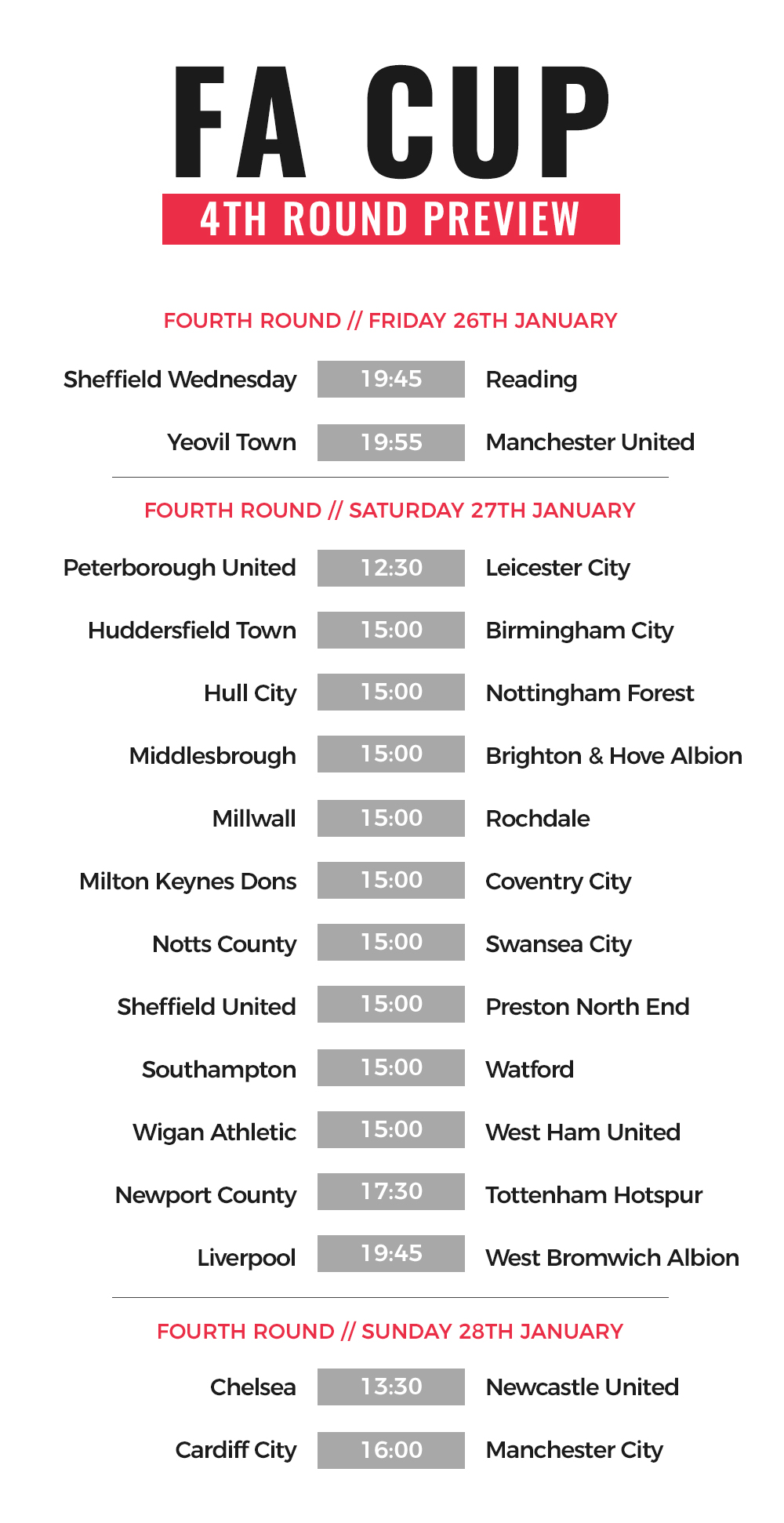 The new year has brought with it the third round of the FA Cup 2018, which started on the 5th January. It kicked off with Merseyside rivals Liverpool and Everton going head to head, which ended in Virgil van Dijk scoring the 85th winning goal and finishing as 2-1 to Liverpool. However, on Monday night Liverpool suffered a 1-0 defeat to Swansea, meaning they need to win their 4th round tie in with West Brom.

With the premier league title out of sight, the FA cup is important to Liverpool, and they can still take confidence from getting one over on their Merseyside rivals in the previous round, with Virgil Van Dijk scoring a last minute winner. West Brom might have seen off Exeter City, but premier league opposition are likely to be a bridge too far.

Manchester United had a glorious 2-1 win against Derby County, with goals from Jesse Lingard in the 83rd minute and a show-stopping last minute goal from Romelu Lukaku. The game itself was frustrating for both teams, looking like it was going to end as a nil-nil draw, but the two spectacular goals put Manchester United in the winning position - even after some fine saves from Scott Carson for Derby.

On Monday, United announced that they had signed Alexis Sanchez from Arsenal, with Henrikh Mkhitaryan taking his place. In the Manchester United v Yeovil Town match tonight, Sanchez is expected to make his debut for United, meaning that the players will have to keep their focus on the game amidst all the excitement surrounding the player. However, United have won their last four matches in the third round of the FA Cup, with Premier League victories over Burnley, Stoke City and Everton.

On the 6th Jan, Watford absolutely annihilated Bristol City in a 3-0 win, with goals from Carrillo (37’), Deeney (57’) and Capoue (85’). Minutes after the first goal, Bristol City came close to equalising but their efforts were futile as Watford scored two spectacular goals throughout the rest of the game.

But will Watford take back the glory and beat Southampton in the 4th round? This one is tricky to predict. Southampton drew against Tottenham on Sunday, showing both attack and resolve throughout the whole game. However, with both Watford and Southampton having huge games against teams at the bottom of the Premier League this week, we think that their managers will be focusing their efforts on those - so it could go either way.

In the Aston Villa v Peterborough match, Villa looked set to triumph as Keinan Davis scored after just eight minutes, but Peterborough fought back and triumphed over Aston Villa in a stunning 3-1 win, with goals from Jack Marriott, Ryan Tafazolli and then Marriott again.

On Saturday, Peterborough play Leicester at the ABAX Stadium in what we think is going to be a decent game. Jack Marriott has proved himself to be a top scorer, and with the assistance of Marcus Maddison - who set up two goals in the Villa v Peterborough match earlier in the month - Peterborough are a force to be reckoned with.

We noticed you are visiting us from USA.

Your currency has been updated to USD.